Get fresh music recommendations delivered to your inbox every Friday.
We've updated our Terms of Use. You can review the changes here.

"Put On Your Old Grey Bonnet" 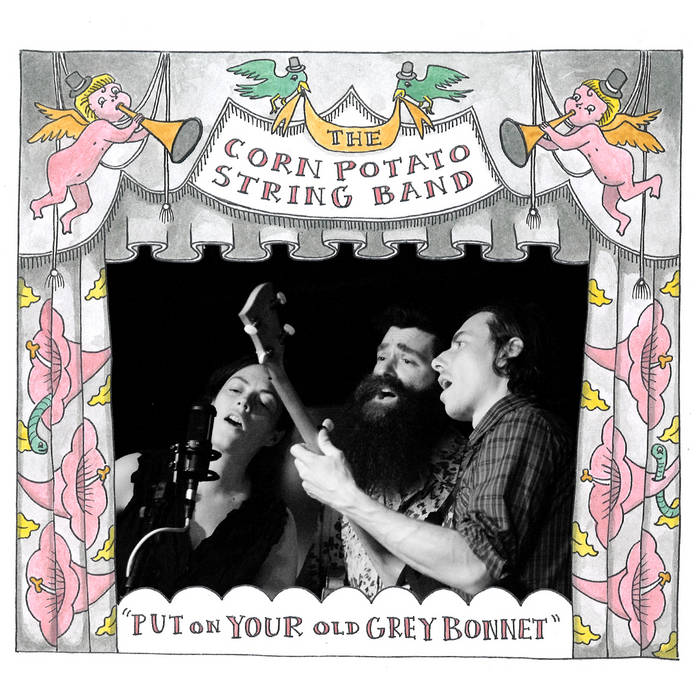 Washington & Lee Swing County - Lindsay and Aaron were busking on the streets of New Orleans before the days of the Corn Potato String Band, searching for songs they both knew. This was one of them but they knew different versions; hers, a swing song with lighthearted lyrics she got from Louis Armstrong, and his, a classic bluegrass fiddle tune from Kenny Baker. Rather than argue about which version was ‘correct,’ they decided to play them both at the same time. And years before that happened, Aaron and Ben played this song in their old band and Aaron even won some ribbons playing it at fiddle contests over the years (most recently First Place at the Wilson County Fair in 2015). We are also quite proud of our vocal arrangement which mimics the double-stopped fiddle intro on the second chorus. One of the most well-known football marches ever, this tune was written in 1910 by Mark W. Sheafe (class of 1906, Washington and Lee University). The lyrics come from Lew Brown and Ray Henderson’s parody version, “The Dummy Song.” Aaron on fiddle, Ben on banjo, Lindsay on guitar.

Buck Ryan Rag - From the great early bluegrass and old time fiddler Buck Ryan, whose playing first came to our attention through the classic Jim Smoak & The Louisiana Honeydrippers album, “Bayou Bluegrass.” He also played a good deal with our favorite banjo player, Don Reno, among many other greats. Lindsay plays melody fiddle, Aaron plays and arranged the harmonies and Ben played guitar.

Put On Your Old Grey Bonnet - A classic right out of the Classic American Songbook, we got this one from The Mills Brothers, arguably the greatest vocal group of all time. It was written in 1909 by Percy Wenrich, lyrics by Stanley Murphy. This song, like all the others, was recorded live with no overdubs and so it required some acrobatics for Aaron to switch from banjo to fiddle mid-song. Ben got his version of Suwannee River from Jimmy Arnold and Aaron arranged the instrumental and vocal harmonies. Ben on lead banjo, Aaron on harmony banjo and fiddle, Lindsay on guitar.

Andale y Vamos - From the Medina River Boys, for those lacking Spanish see translation below. Lindsay on Hawaiian steel guitar, Aaron on fiddle, Ben on banjo.

Green Valley Waltz - A beloved tune that gets played by a lot of great bands, the version we love the best comes from Fiddlin’ Arthur Smith. Aaron on fiddle, Lindsay on guitar, Ben on banjo.

Poplar Bluff - One of the great Ed Haley’s more raucous tunes, this one really gets us going. Aaron fiddle, Ben banjo, Lindsay guitar.

Sunny Tennessee - We got this one from a Betty Cody recording and learned it for our residency at the Wilson County Fair in Tennessee in 2015. We played in the old timey village on an old timey stage put together by our dear friend Buddy Ingram. Lindsay guitar, Ben banjo, Aaron fiddle.

That Hot Lick Fiddlin Man - Take every chance you get to play a Bob Wills tune, that’s what we say. We took some liberties with the lyrics, too, hope you don’t mind. Aaron and Lindsay on fiddles, Ben on guitar.

Listen To The Mockingbird - A genuine old classic, Abraham Lincold was especially fond of this tune, saying, “It is as sincere as the laughter of a little girl at play." The music was written by Richard Milburn in 1855 and its lyrics (which we omit) were written by Septimus Winner under the psuedonym “Alice Hawthorne.” It’s been a standard show piece for fiddlers for decades but Aaron has only recently worked up the courage to play it in front of people. Can you guess all the birds represented in this version? (Hint: One of these birds is quite rare. It is also represented on the cover of the album!) Aaron on fiddle, Ben on banjo, Lindsay on guitar.

Come on, baby, tell me somethin' about how things work 'round here.
Share a kind word with me so I can ask you fer a dance.

Share a kind word with me and tell me you love me.
Damn life's a bitch, just 'cause I ain't from around these parts.

Share a kind word with me and accept my love.
Damn life's a bitch, just 'cause I ain't from around these parts.

All songs public domain, except That Hot Lick Fiddlin’ Man, by C. Walker, B. Wills (Unichappell)

The Corn Potato String Band has achieved high praise in traditional
American music, keeping old time fiddle and banjo music from a one-way
trip to the dustbins of history. Theirs is a story of struggle, hard
knocks and triumph. Essentially unable to cope with modern life, the
members of this band are outcasts of society who survive by playing
the lost music of the flatlands where they were raised. ... more

Bandcamp Daily  your guide to the world of Bandcamp